Black Down (AKA; Rowberrow Warren, Beacon Batch) and Dolebury Warren

Black Down is the highest hill in the mendips, with varied and challenging terrain. It has a combination of rugged single-track and (often) muddy downhill. The main downhill runs are predominantly located in the west face of the hill, within the forested area of 'Rowberrow Warren' while majority of the cross-country trails run from the Dolebury Warren to the north west, across the moorland of Black Down and then back around. You can also connect this with a ride to Cheddar Gorge or Velvet Bottom. If you don't mind the occasionally endless bog that Black Down becomes, these hills present some excellent riding, great views and a pint afterwards at the 'Old Inn' in Congresbury (The Congo, for us trendy people).

The downhill runs are located in the west face of the hill, in 'Rowberrow Warren'. They're somewhat hidden, but are worth hunting around to find. The entirety of this area has a tendency to become sodden, and the downhill runs are no exception, but are still ridable. Many of the runs also feature table-top jumps or drops, but none of the ones I've encountered are unavoidable if that's not for you. The 'Christmas tree trail' downhill is a great run, long and fun, although when initially entering the forest at the start of the trail, you're essentially blinded to the surprising darkness of the dense pine trees. This run seems to become progressively steeper towards the bottom of the hillside. One thing to watch out for is the bridle-path crossings, which occur regularly, and are (apparently) a major point of contention between riders and others (walkers and horse-riders) The Christmas tree trail has it's steepest, rockiest section at the very end, followed by a stream crossing.

View Black Down in a larger map

Here's a video of the Christmas trail trail. The initial section is insanely dark, the trees are so tightly packed together. It soon opens up, but it's a fun trick to play on your buddy - don't them them how dark it's going to be before you go in.

My preferred cross-country route starts at the car park. You climb up the footpath, leading you though the hamlet and up 'Doleburry Warren' onto the pathway called the 'Limestone link'. Initially, it's made of firm stone and although steep, it's my preferred way to ascend. Once you get to a iron age fort, which retains obvious remnants of the walls. This area doesn't tend to get particularly sodden. Once you've breached the fort, the trail flattens out, and you can descend. After navigating some tracks, the long, slow and often sodden ascent of the moor starts. 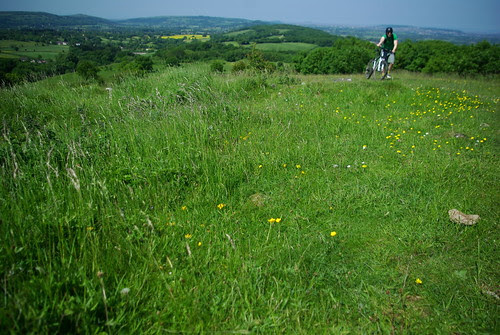 The bluebells are out late. 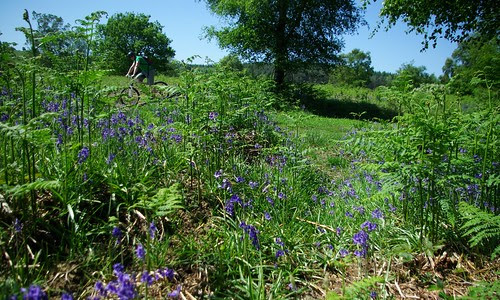 There is a fairly steep climb south, along a wide track, which is potentially sodden. 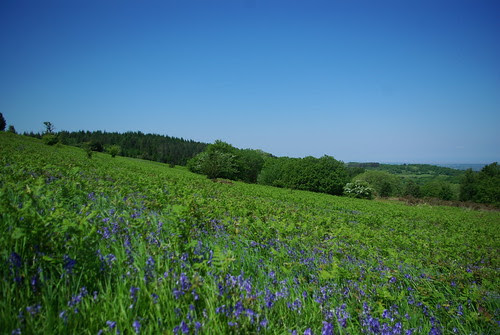 The area is popular with horse-riders, walkers and cyclists.

The trail leading to the trig point is almost comically hollowed out, and you're not supposed to cycle there. I think this rule is largely ignored. 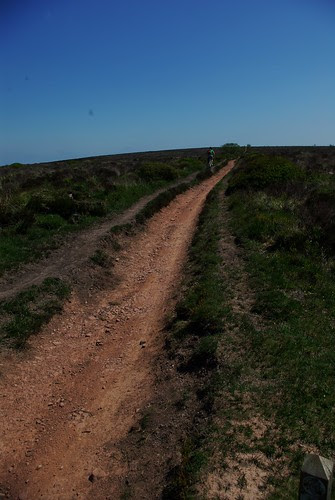 Once you reach the trig point (not shown), there are good descents, either take the trail leading north, or east. Both of these are good, rocky descents. If you head east, you'll reach the fence, and can start heading north for some more, less rugged, descending. This will reunite with the limestone link, which is a lovely bit of singletrack, although it's best to watch out for walkers. The photo below shows the tail end of the first descent from the trig point. 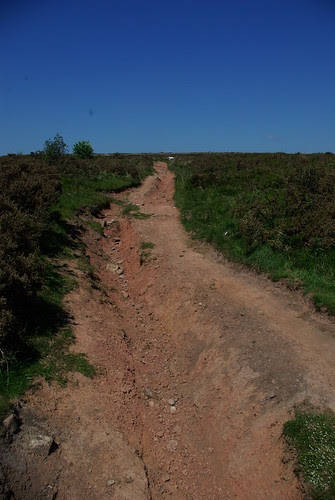 There are two stream crossings when heading back along the limestone link, which eventually reunites you with the main 'junction' area before reaching the moor. From here, you can descend a number of ways, or follow the fence-line south (there's a track running largely parallel). Following this track will eventually lead you to an entrance to Rowberrow Warren, where the sweet downhill trails are. They're worth searching out, especially the Christmas tree trail, which is great fun even if you're not into jumps, which the video above focuses heavily on. 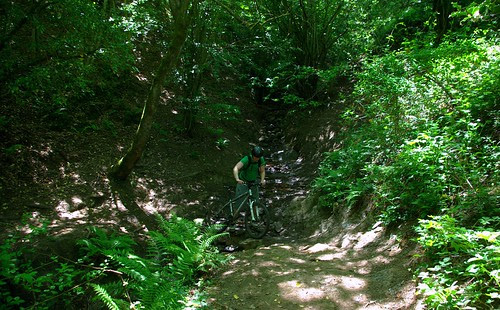 Halfway down the Christmas tree trail. 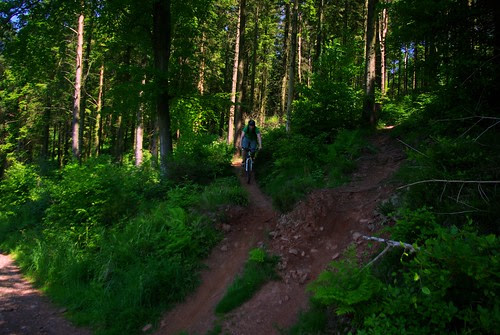 Matt bombs through the stream at the end of the Christmas tree trail. 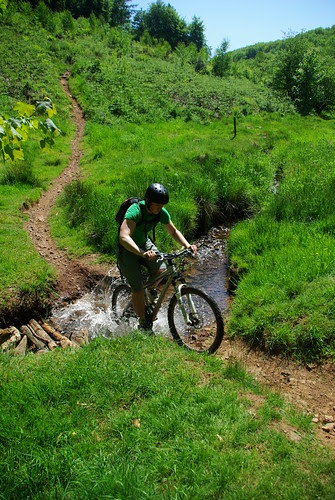 Once you finish the Christmas tree trail., you can head North along the bridleway and back to the carpark. There's some extra singletrack running parallel with the track. Black down is great but can be a lot of work, and as I've stated before, gets sodden for much of the year. I don't know the downhill trails particularly well, but I'm certain there are lot more secret downhill trails I've yet to find.