Pen y Fan is the the mightiest mountain in the Brecon Beacons, standing at 886 metres. It forms part of a strangely interconnected ridge system between Fan y Big (yeah, ha ha), Cribyn and Corn Du. On a nice day, or even a fairly shitty day, this place will be painfully overrun with numerous groups of hikers. The marked paths are a mixture of large and often loose rocks and groomed gravel. You can't miss the paths, and the basic 'horse-shoe' route can be eyeballed from the majority of the trail, making path-finding easy, even if you're a shitty navigator like me. I chose a day that threatened heavy rain with sunny spells, which worked out well, the dramatic weather improving the photos and minimizing the number of walkers. Since I was illicitly cycling on footpaths, the presence of walkers was a concern, although much of the time was spent dragging the bike up the steep slopes. It's a good ride though, if you don't mind the pushing, the second half spent bombing along the technical rocky paths along a plateau or ridge. My initial plan was to take an extended off-road route when returning south to Merthyr Tydfil, although I wasn't sure of the quality of the paths, and was running out of time, so cut this short, although I'd like to check this section out in the future. Here's the route map. For a chunk of the exit from Merthyr, I took the Taff Trail/National Cycle Route 8, which crosses a couple of viaducts and avoids spending ages going uphill through depressing suburbs or Merthyr.

It rained on the way, but that was fine. 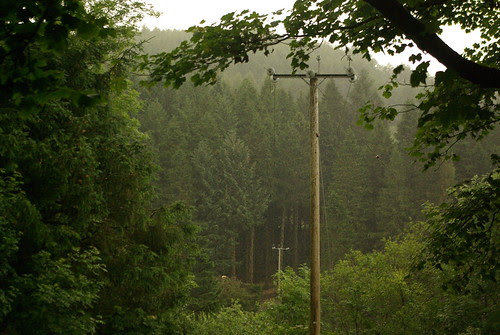 A track, marked as bridleway, leads you gently up the 'gap' mountain pass, a famous mountain biking route. Having only done the first half of this route, and then diverting onto footpaths, I can't really pass judgement on it, but I will anyway. It's pretty dull for the most part. Maybe the descent is really sweet, but the ascent was predominantly technically featureless. There is only one potentially challenging section , a small channel cut by a stream, with a steep descent and loose rock and dirt. The rest of (the first half) of the gap path is just track. You ride up it. Then you get to the top. 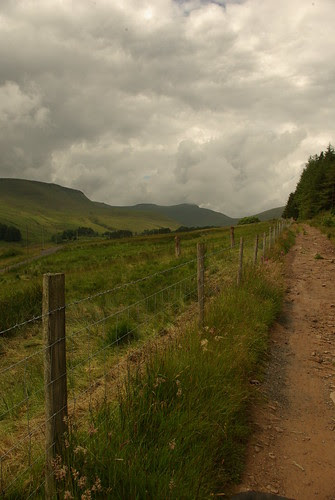 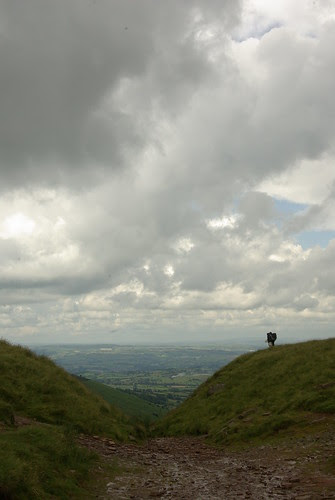 I diverted at this junction, head west avoiding Cribyn, sticking to a rocky piece of rocky single-track the mostly followed the contours. This path is covered in rocks, which are large and often loose, making even the flat portions challenging although in a satisfying way. Since this route is designated as 'footpath', and the area is popular, I had to allow people to pass numerous times. 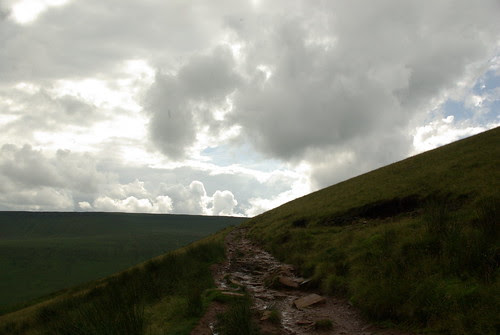 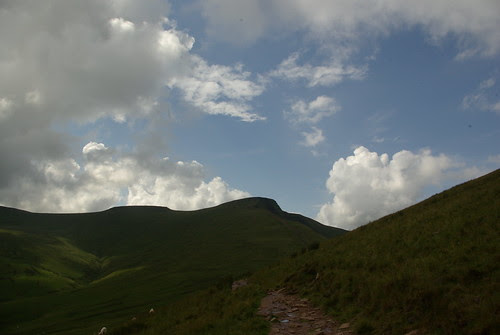 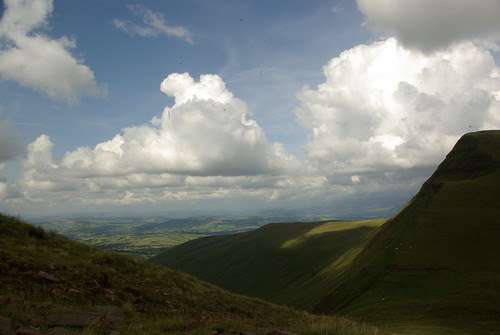 Near the plateau of Pen y Fan, large blocks of rock form the edge, although it's still perfectly passable. 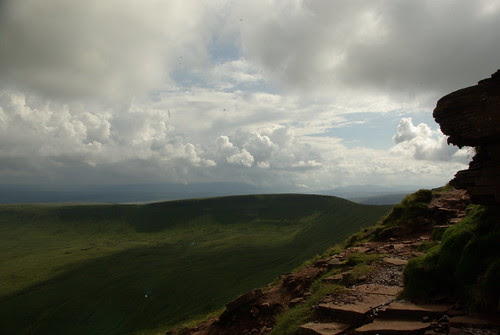 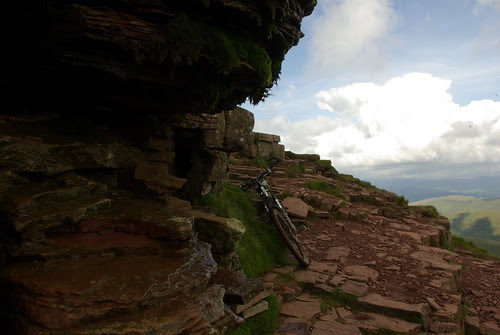 Apparently the summit is often cloudy, according to some guy I met near the top. This holds to be true with the one other time I hiked there, when the cloud was so thick that often fleeting glimpses of the surrounding countryside were visible. There are three main paths down, the east, which I'd come up, the south-east and the north. I south-east allows to to circumnavigate the Neuadd Reservoir. I should have inspected the North Route; it looks fierce, based on the gradients. 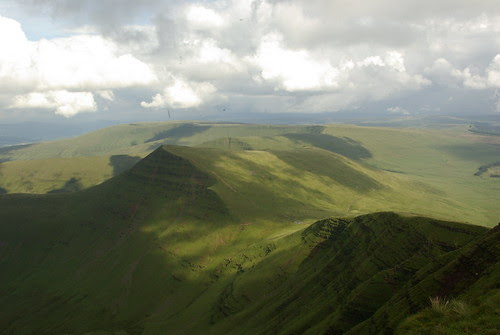 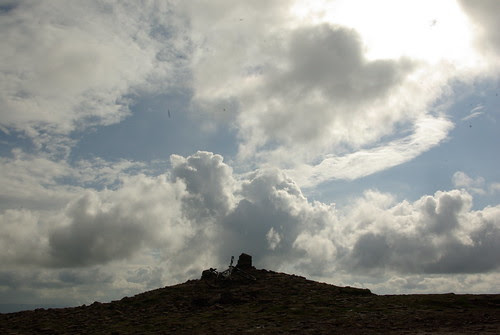 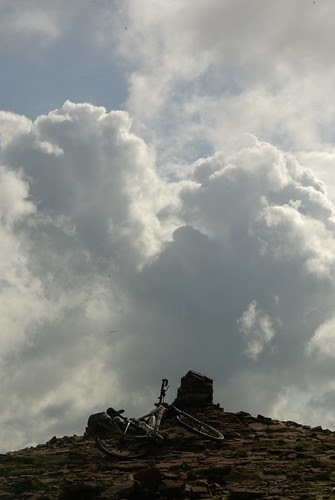 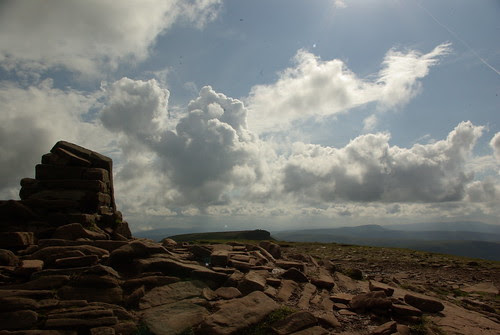 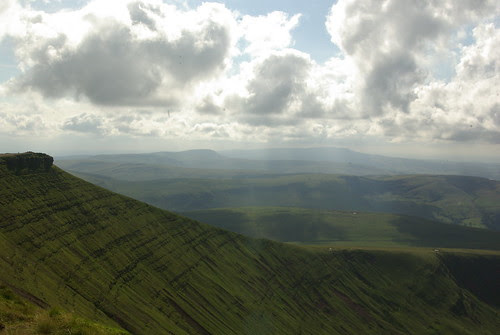 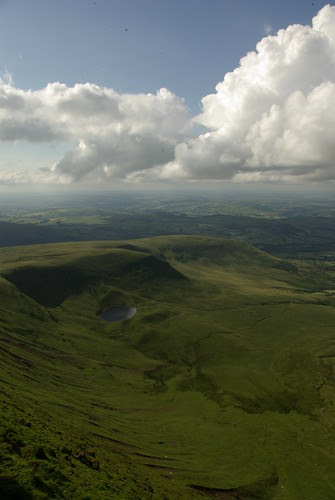 Heading south-east takes you down a rocky staircase, which was too techy for me for the most-past. A heavily groomed trail heads towards Corn Du which is similar to the peak of Pen y Fan. After Corn Du , the path slopes gently downhill, close to the east edge, along the top of the escarpment. This sections of path (along Craig Gwaun Taf and Rhiw yr Ysgyfarnog ) is good, techy fun. The gradient is on your side, and despite all the rocks, the boggy or muddy portions and the height, this section is great fun. 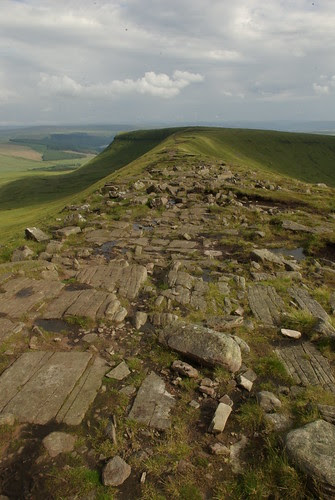 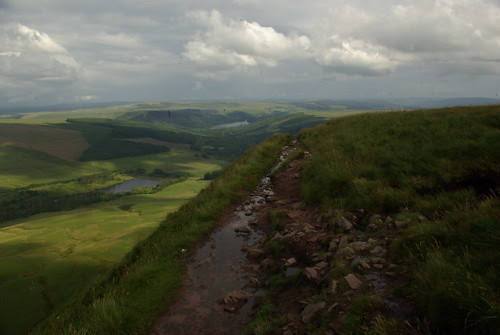 The descent back to the upper Neuadd reservoir seems to be on top of a stream - the dirt is loose and muddy, and steep. My original plan has been to go along a path just above the tree line, over Twyn Mwyalchod and Bwlch Gwyn, then rejoin the road. however, time was running short and I picture myself waist deep in mire and having to stay in Merthyr. 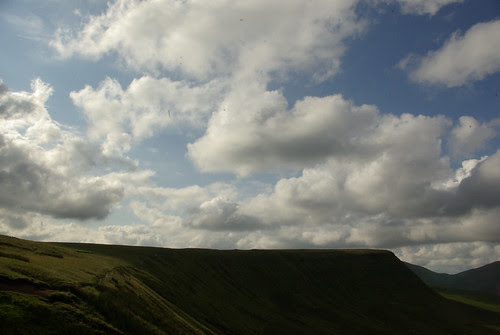 It was a good ride. Lots of pushing though, there might be another approach that could allow for a ridden ascent.
Posted by C.H. at 08:50