The Picnic Bench downhill trails are probably the easiest to find and most well known in Leigh Woods. The moniker is derived, unsurprisingly, from presence of the picnic bench that sits atop the trail, with steep descents leading down the gully-side. These trails present a number of different routes, with varying levels of difficulty. The main technical features are switch-backs (sharp corners that where a trail descending sideways turns back on itself, while still heading downhill.) but the trails lack any significant drops or technical sections.

To find the picnic bench, the parking lot is probably the easiest starting point. This can be reached via the main road, or via the new manufactured blue trail, 'yer tiz'. If you go enter from the north road entrance to the woods and go along most of the trail until you reach a break, with an sign containing information about Leigh Woods and the car park on your left, you can leave the trail and turn back on yourself to head towards the picnic bench. This isn't the quickest way to get through from the beginning of the blue route, but I reckon the easiest to explain. Anyway, you take the track that goes away from the car park in the direction of the gorge, so slightly downhill. The track comes to a fork, each division of which goes along the opposing side of a gully. To reach the picnic bench, turn right.

The track leading towards the picnic bench; 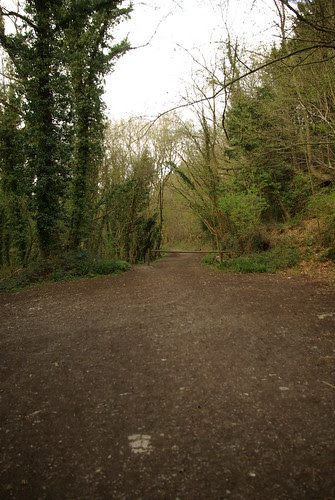 The left will take you towards the 'Knicker trail' and 'Paradise bottom', both of which are worth a look. The Knicker trail is the downhill run that's opposite the picnic bench, which I'll cover in the future. Turning right will take you along a track, which leads straight to the picnic bench. To the right of that track there's a stretch of single-track which ends with a moderate drop, which can be ridden instead of following the footpath. 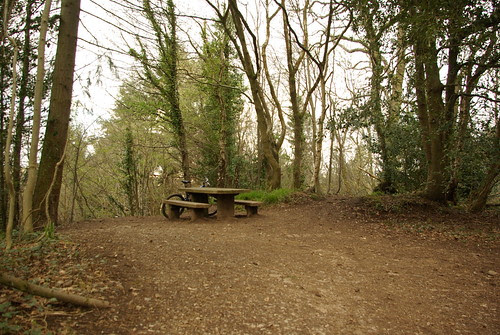 There are two main trails, one that pulls left from the picnic bench and is the easier route down, lacking switchbacks, minimal technical features and only one steeper portion at the end, which still isn't particularly steep. Looking towards the gorge, the main run is to the left of the picnic bench, and should be obvious if you just walk to the edge of the slope and look down. The start is significantly steeper than the rest of the trail. There are a few ways to start, one on the left, which is rocky and rooty, a more subdued one to the right, and a rocky 'chute' on the far right, which is the least steep of the three. The main route down follows straight down after the steep beginning, and the remainder of the run is much shallower, and lacks any particularly problematic rocky or rooty bits. The main technical feature are the numerous switchbacks, causing the trail is zig-zag down the hill. Many of these switchbacks are eroded, and new lines are carved so all many of diversions and variations are possible, although the main trail is probably the most natural approach. The majority of the terrain is soft and loose, so be prepared to lose traction.

The chute, the least steep of the three starts; 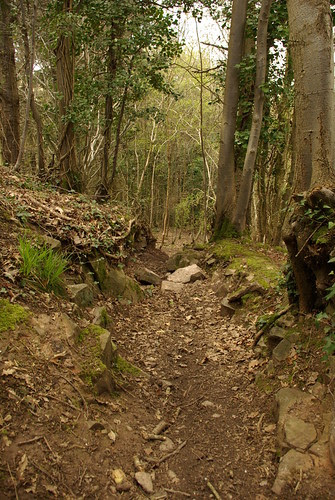 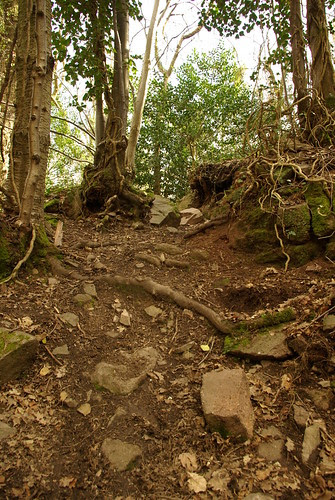 I go down the wuss start; 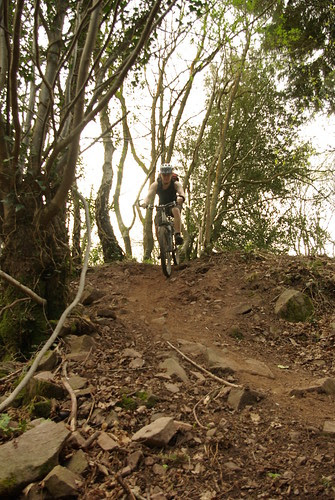 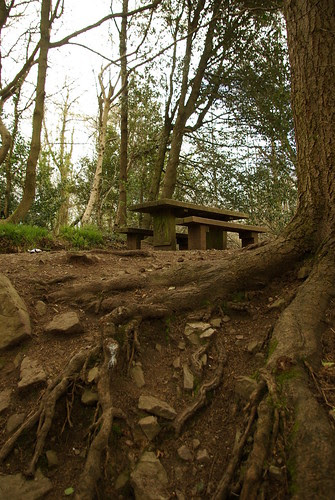 A view of all three starts, from the bottom; 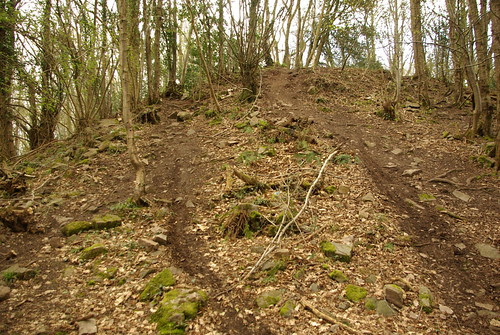 There's also another downhill run starting on the right of the central trails origin, which looks fairly neglected. It can be ridden in such a way to feed back into the main trail. 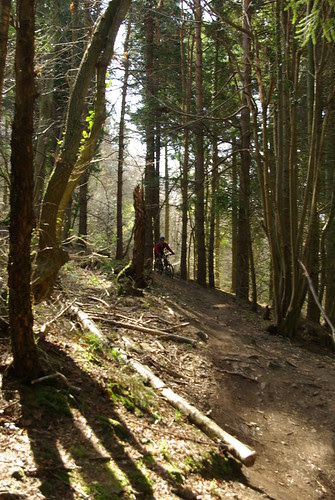 Once at the bottom of any of these downhill trails, you end up at a wide track, which you can head left (uphill) to a path, which forks to the right when the path gets rocky. The rocky path is difficult to ride up, but is probably the quicker way to return to the picnic bench. You carry on up this path, then turn left and left again, then straight along the footpath that leads to the picnic bench. Turning right at the fork is much more subdued, leading gradually up the opposite side of the gully ( to the picnic bench downhill) before reaching the top and curving back round on itself. 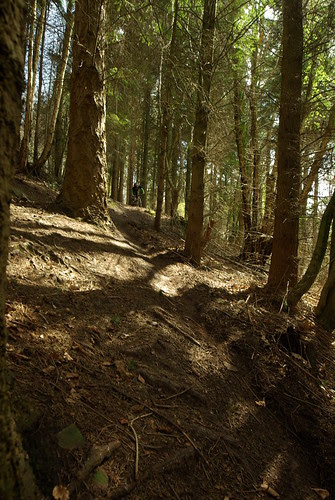 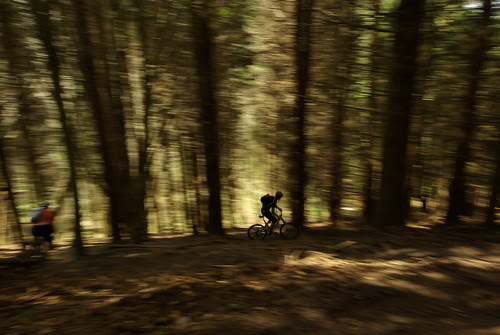 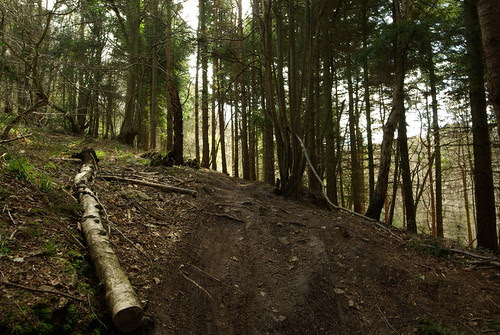 One of the switchbacks; 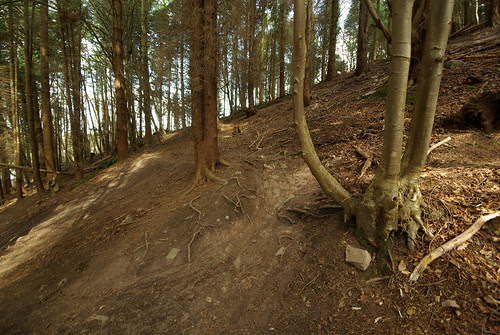 At the top of this path, another downhill run begins, known as the 'Knicker trail', which is good fun if the picnic bench whetted your appetite. I'll discuss that soon. If you want to return to the picnic bench, follow the path round until you reach an intersection with another path, hang a left which will take you back to the start. Probably the easiest and quickest way back to the top of the picnic bench is to turn right at the bottom of the run, then right again and go straight back up the hill, to the left (nearer the river) of the runs.

The entrance to the gully, from the portway trail, which runs along west side of the river Avon; 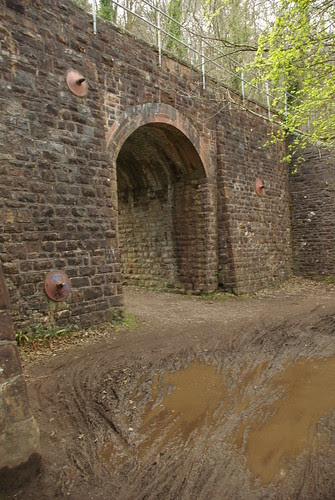