Despite being a bushwhacking, cross-country nerd, with the dorkiest bar-ends in the world, a pannier rack and an ergonomic saddle, I do like to chuck myself down a hill every so often. More often than not, this involves mincing and hoping no-one sees. Anyway, they’ve recently build a few miles of ‘blue’ graded trails in Leigh Woods, which are fine and weather-proof and whatever-the-fuck, but they’re tame. They always seem neutered, in a way that more natural single-track doesn’t. Anyway, I’m not too curmudgeonly, I enjoy the new trails, but they lack something. Fortunately, there’s still significant natural single-track that remains in the Leigh woods, Fifty Acre woods and Abbott’s wood. I’m going to focus on some of the downhill routes, with directions and photos of the notable features. The first one is ‘Rocky Horror’, which despite the name, is actually relatively mild, but somewhat (a shit-ton) rockier than the usual trails around these here parts.Here's the location on an O.S. map, I think. To find the start of the trial, take the blue graded route ‘yer tiz’ from the normal start at the gate in the stone wall and ride along it until you reach the ‘skills loop’ section, which has little signs and orange indicators all over the place. Whether you complete the skills loop of not, keep going towards along the trail and you’ll hit some wide footpath. 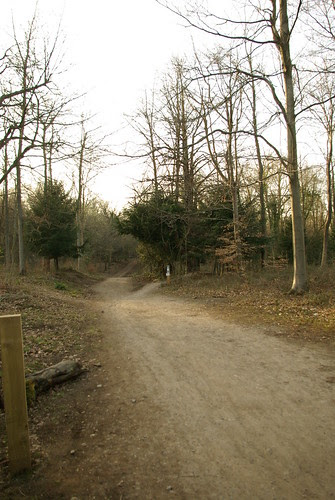 Hang a right and go about one hundred metres along the trail. On the left will be a tree, and a shallow gully with a trail running down the middle. 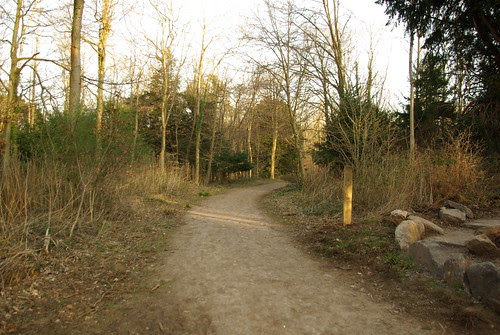 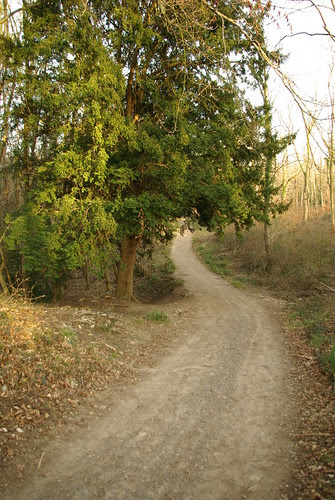 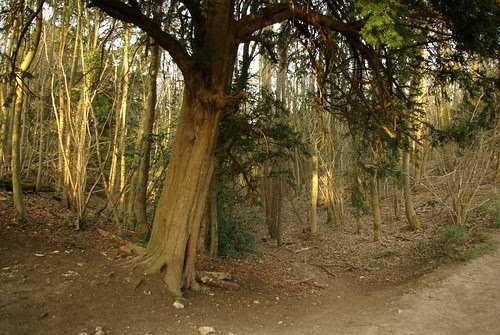 This is the beginning, which isn’t particularly steep or technical, although a lot of dead wood can end up on the trail. 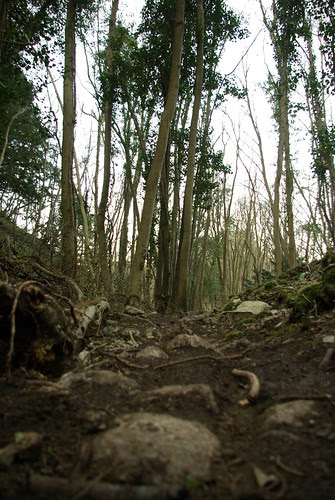 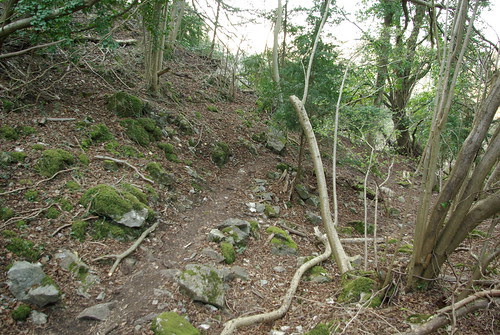 The rocky portion of the trail is fairly non-technical; you’ll just do it quicker with some guts and suspension. After the rocky run down the gully, the trail peels off to the right, and along a sloping, which slopes down (left) to a steep face. There’s a couple of roots in the trail, but if you maintain your momentum, you should be able to clear them easily enough. 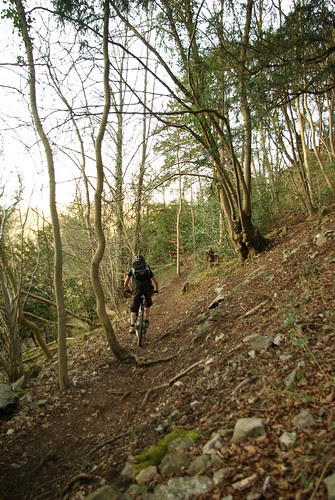 The trail then goes right, and you begin descending again. After the initial descent, the trail zig-zags back upon itself, before the final stretch. This corner isn’t tight enough to be considered a switch-back though. The trail then descends, with the majority of the trail features being exposed roots and a few rocks. 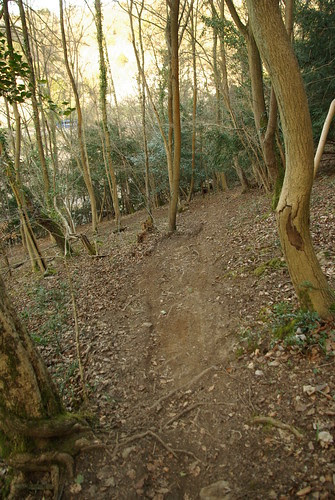 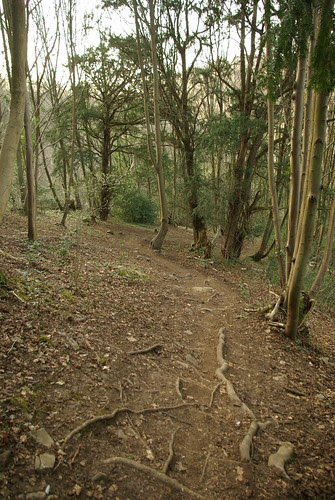 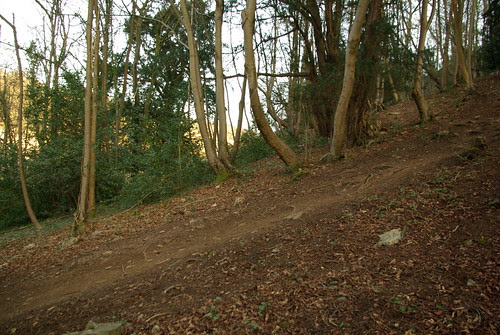 You finally come to the train line, turn left and drop into an old quarry, with plenty of run-off space. 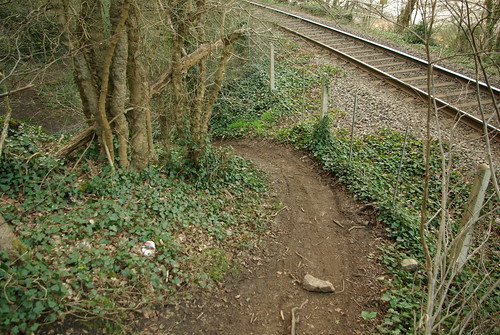 The quarry has a few single-track paths leading into it, but they’re all fairly circular and don’t lead anywhere in particular. Teenagers have clearly used the spot as a spawning point evidenced by beer cans and nitrous canisters. 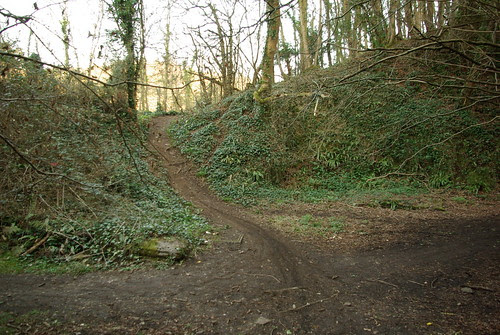 There’s a temptation to explore the path on the opposite side of quarry. Anyone who has ridden down this, I salute you. A friend and I once decided to check it out, by pushing our bikes up it. Don’t do this. As you can see from the photos, this is a knife-edge ridge, with steep drops on both sides. This is in addition to the general steepness, rocky drops and exposed roots. It’s clear from the overgrowth that the trail is very rarely ridden, which I don’t find surprising. Anyone who can ride this, I salute your strong and plentiful balls, and pre-emptively offer my condolences to your mother. 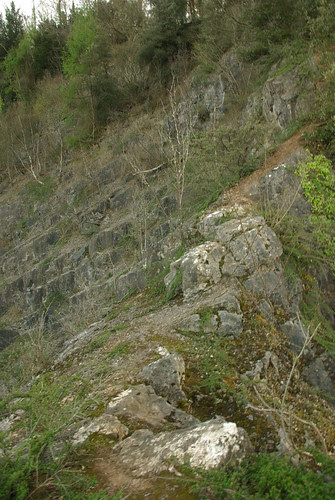 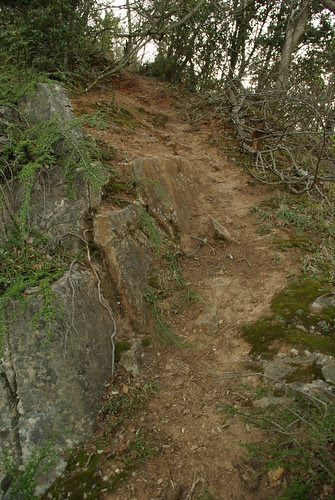 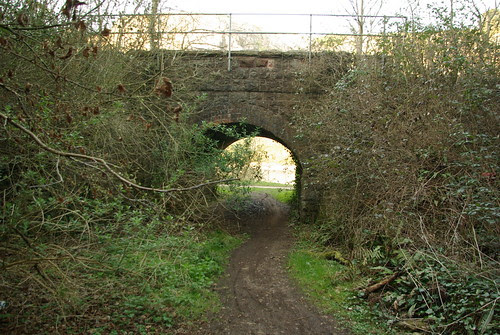 Instead of embarking up the knife-edge ridge, I’d go out onto the gravel path along the river and go either left or right. Left will take you toeither the bottom of the picnic bench downhill or ‘Paradise Bottom’. Paradise Bottom can be recognized by the stream originating from the woods and joining the Avon. It’s generally pleasant and offers some decent single-track. Heading right from the tunnel under the railway will take you to the bottom of a footpath that can be ‘walked’ back to the entrance of Leigh woods. 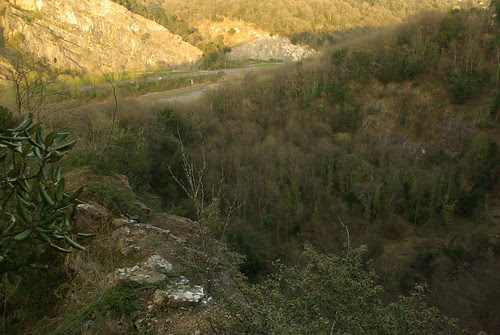 Obviously, like everything around Bristol, this trail get sodden for large parts of the year. 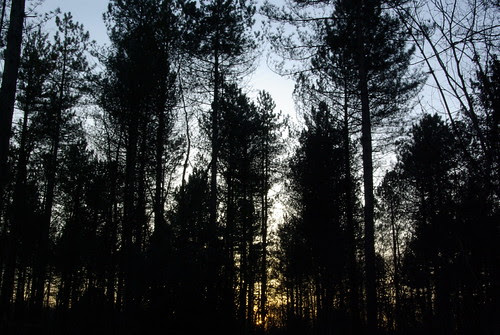